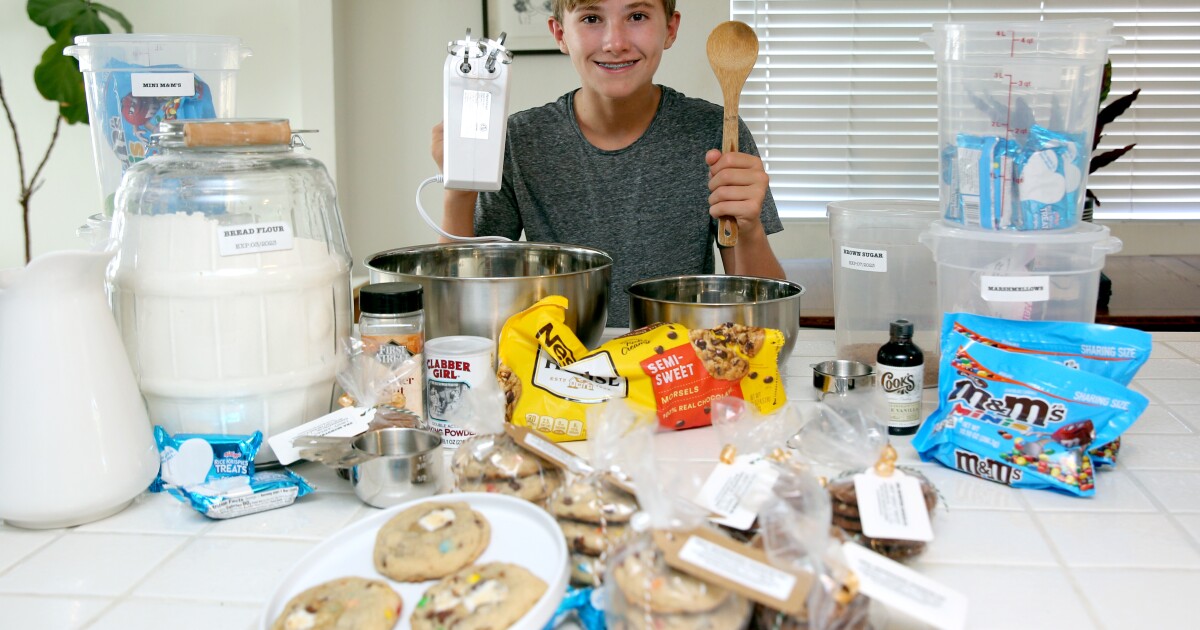 Jasper Rogers was 11 years old and looking for ways to make money last summer, when he and his sister, Elise, baked a batch of cookies and stumbled across an alchemy of ingredients that would inspire a company to full share.

Sea Monster Cookie Co., which recently obtained a business license in Costa Mesa, will serve sweets at Tuesday night’s “Concerts in the Park” performance at the city’s Fairview Park while supplies last.

There, attendants can purchase Anzac (Australia New Zealand Army Corps) rolled oatmeal “biscuits” — a tribute to the homeland of Jasper’s mother, Yvette Rogers — and the company’s signature Sea Monster cookie, named for its colossal size and hint of saltiness. candy.

For the past year, Jasper has served in school and summer camp, where children, teachers and counselors rave. Sea Monster Cookie Co. made its public debut at Costa Mesa’s Fish Fry in June, selling 150 bags of cookies before the event ended and earning a following on Instagram.

Yet as successful as the company is, Jasper will tell you that the business started on a lark. The family was going on a trip to Catalina Island, so he and his sister decided to pack some snacks for the trip, but soon realized they were missing a few key ingredients.

“We had everything – the flour, the salt – but we had a few holes,” recalls the youngster, now 12. “We were originally supposed to make them with baking soda, but we didn’t have any, so we decided to stick with something different.”

Feeling creative, Jasper tossed chocolate candy and marshmallow candy pieces into the batter. The duo put the cookie sheet in the oven not knowing what the outcome would be.

“They were delicious. So good,” her sister Elise Sechrist, 25, said of that fateful first batch. “I think we were surprised.”

The cookies were a hit over summer vacation and were so good that Jasper started selling them to kids for $1 each at Camp Halecrest in Costa Mesa, where he attends programs. After one sample, the kids were hooked.

“What makes cookies sell, I think, is just giving people a taste if they’re not already convinced,” he said, describing his gooey and colorful creations, which are now sold in a bag of four for $8. “After trying them, they will be convinced.”

Halecrest activities director Sharon Comer recalled encouraging Jasper to sell his cookies at the camp snack bar, where the older kids take turns at the checkout.

“I thought since he had these cookies that were so good, maybe he could sell them,” she said. “He did it and sold out – there was just no stopping him.”

The cookie industry is not Jasper’s first encounter with capitalism. He had tried to buy and sell Yu-Gi-Oh! and Pokemon Trading Cards, but the overhead was too high to make a profit – a week of chores brought in a small income that was summarily spent on buying inventory.

But with their relatively low overhead and the fact that so many could be crafted at once, cookies presented the sweet spot for the budding entrepreneur. Jasper sold cookies at Halecrest’s fall shop last October and a chili contest this spring.

At graduation time, he took and delivered special orders from his California elementary school classmates who had insisted on having Sea Monster cookies at their parties.

“I’m doing side work from here to there,” he said of his current activity.

Rogers – who helped her son get a license from the Orange County Health Care Agency to produce homemade food and a business license to sell it – said that apart from the money, the running a small business involves many valuable lessons.

“It’s interesting to have discussions in the car about the economy and just talking about things, so when he reaches that point in his upbringing he has a benchmark for that,” she said. “And Jasper runs all of his own sales, so he has to make money [using] math.”

“Math is useful,” confirms Jasper. “I remember thinking, when am I going to use fractions in my life? Now I know.”

The youth of Costa Mesa have amassed quite a bit of savings so far. He now buys grocery supplies and plans to use some of the funds to help grow the business further, while looking for the next investment opportunity. He also has his eye on a new mixing board.

Sechrist said she was very proud of her brother for turning a day in the kitchen into an ongoing business.

“He had a vision,” she said. “He wanted to make money and learn how to run a business. I think it went well.

Comer said that for a kid like Jasper, the sky is the limit.

“I think cookies are just the beginning,” she said. “I can definitely see bigger things in his future.”

Support our coverage by becoming a digital subscriber.