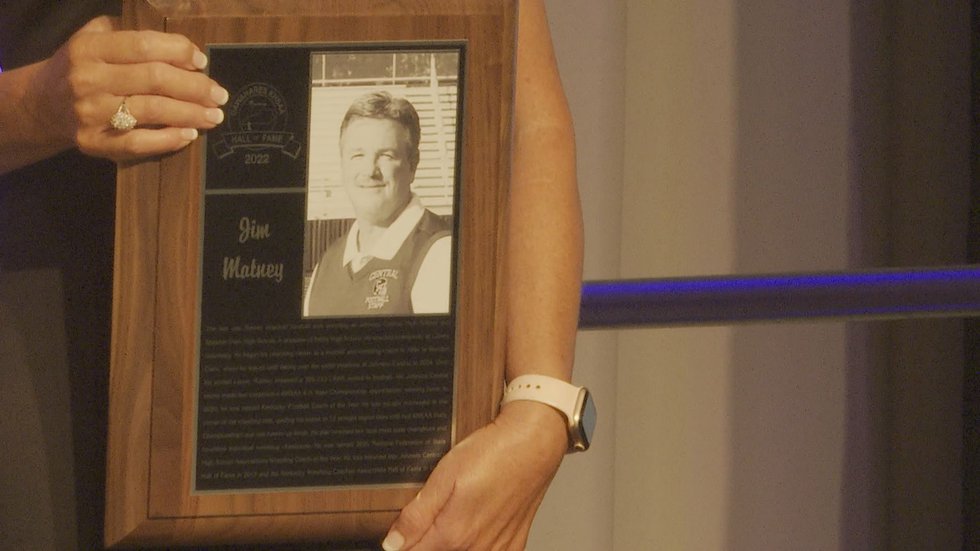 ‘He was so superhuman on Friday night’: Hall of Fame induction cements legend of late Johnson Central coach Jim Matney

LEXINGTON, Ky. (WKYT) — Among the 17 honorees in this year’s extended KHSAA Hall of Fame class of 2022 was the late Johnson Central football coach Jim Matney.

By all accounts, Matney was a man raised and married in the mountains of eastern Kentucky. On Sunday, the mentor to many locals received a posthumous honor that those in attendance say he deserved.

“Coach Matney was my mentor, he welcomed me with open arms,” ​​said Jesse Peck, the current Johnson Central football head coach. “You would have thought I was playing for him.”

Matney was a larger than life figure – some would say legendary.

“He was so superhuman on Friday nights or Saturdays at football games or wrestling tournaments,” Peck said.

His stature and success could have taken him down a trail far from Appalachia.

“He was offered jobs all over the country, and every time it wasn’t in eastern Kentucky, he wouldn’t even think about it,” Matney’s wife Debby said.

Family came first for Jim Matney, and by extension his footballing family at Johnson Central followed.

“There was nothing we did that his wife and kids weren’t a part of,” Peck said.

“From coordinators to positions to movie guys to water boys, we were all family,” Peck added. “There was no big him, little us.”

Debby Matney says the support since her death last September has been overwhelming. She says she’s not normally an emotional person, but it was heartbreaking to see the Eastern Kentucky contingency in the crowd when Jim’s name was called today.

Debby says it’s Jim’s core values ​​and concern for his community that will see his legend live on in the Hall of Fame.

“Being good with people, being a nice person, accepting people – that’s what makes Jim Matney,” Debby Matney said. “It’s not wins and losses.”