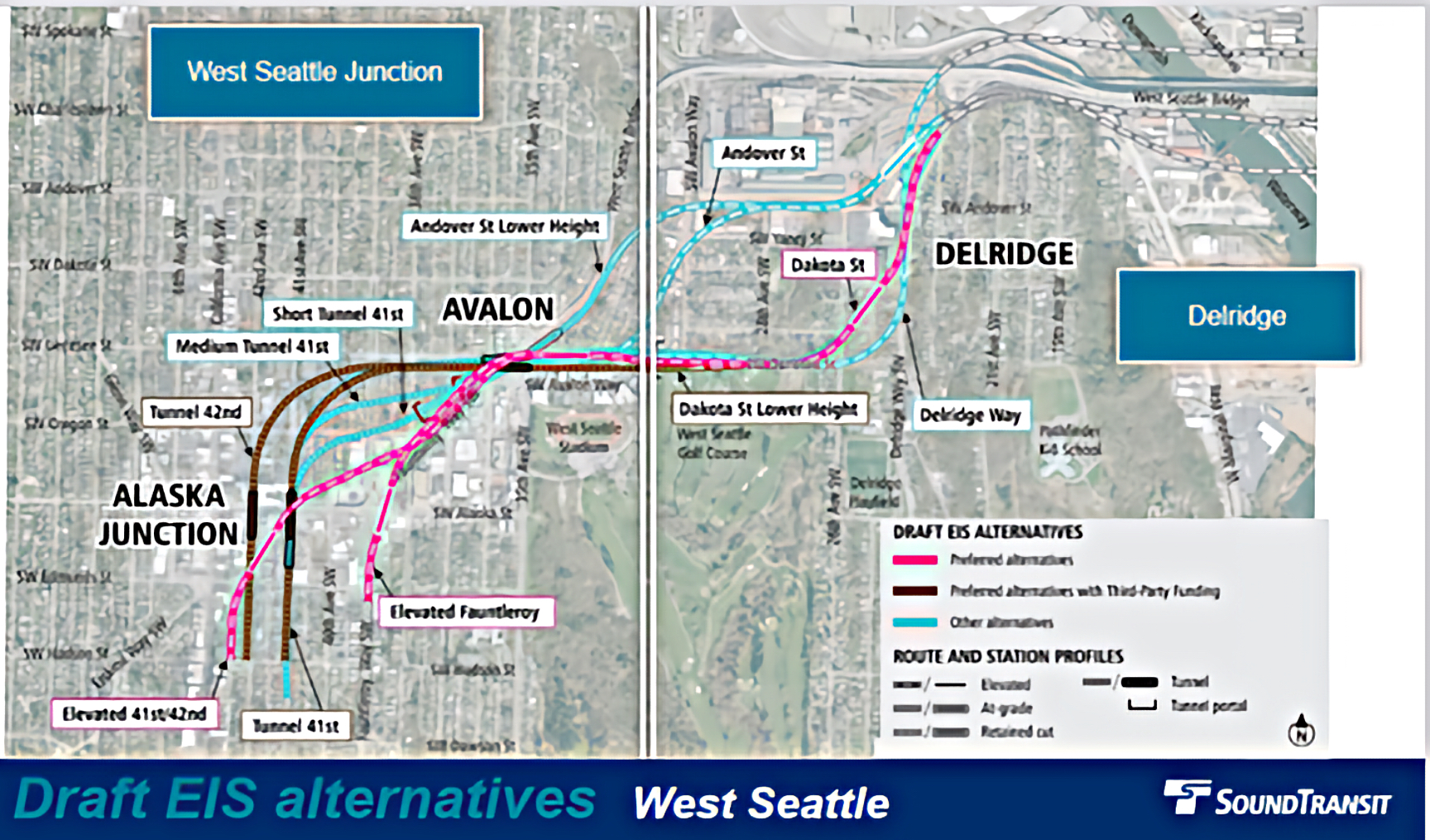 After the public comment period ends, the Sound Transit Board will decide which options will be considered in the final EIS to be released in 2023. Mayor Harrell and Council Speaker Juarez represent Seattle on the board.

The Seattle City Council’s Transportation and Utilities Committee heard a briefing from city executive staff on the EIS project, as well as a related briefing from Sound Transit staff.

City departments will provide a comment letter to Sound Transit on the draft EIS, and the City Executive staff presentation includes information on this. It analyzes issues such as compliance with city codes and whether the draft EIS adequately identifies and mitigates impacts, meaningfully compares alternatives, analyzes impacts on BIPOC communities, and proposes mitigation measures to advancing the joint results of the Sound Transit/City Racial Equity Toolkit.

The presentation notes that the executive will forward a resolution expressing the city’s preferences for Sound Transit’s preferred alternative for the Ballard West Seattle project for consideration by the city council in May/June.

During the discussion, I noted the need for further analysis to ensure good connections with the bus service and potential relocation to Delridge, particularly in relation to the BIPOC communities and small businesses that have been affected by the construction of line H.

The staff presentation noted that the City discourages scope reductions that do not provide commensurate benefits to the system and users. I thanked the executive staff for this post, a post I frequently hear from West Seattle residents.

There was a second presentation from Sound Transit, on a process approved by the ST Board in 2021 for a “realignment plan”, to close the funding gap that Sound Transit staff estimate at 1.8 billion, due to an increase in real estate and construction costs. . Although this process is separate from the draft EIS, it may overlap, depending on the direction the Board chooses to take.

The Board has identified two potential approaches to fill the identified financing gap.

The first is to delay the Smith Cove to Ballard portion of the project by two years, from 2037 to 2039. This would impact users in West Seattle; currently, the West Side of Seattle is scheduled to open in 2032, with transfers to SODO required for the first five years until the Ballard line opens. However, if the Ballard part is delayed, transfers would be required for two more years.

The second approach is to consider cuts in the project to reduce costs. There are two potential reductions in West Seattle. First, for the elevated Fauntleroy alternative, move the station location in Fauntleroy and Alaska to the east, so it doesn’t impact hundreds of residences. This option would result in an elevated line on Fauntleroy Boulevard and is not compatible with the Junction Tunnel.

The second option is to eliminate the Avalon station.

I noted that I had heard a variety of views in West Seattle about the Avalon station. Some emphasize development on and around Avalon and believe it is important to retain this station, while others agree to remove it, but only if it results in a benefit to the community. West Seattle community, like a longer tunnel.

I further noted that a key point of the Racial Equity Toolkit is the importance of ensuring access for low-income BIPOC communities in the south. While a number of these communities would access the line through Delridge, the High Point community (and others) would be more likely to access the line through Avalon station at or through 35th Avenue SW. Thus, eliminating this station would require a clear plan to provide quick access from High Point and adjacent communities on this corridor.

The Avalon station is estimated to have 1,200 daily riders, a relatively small number. Sound Transit’s analysis indicated that ridership would not change without this station; I asked why, and they noted that most commuters would access the junction station, as it’s relatively close, and the stations have relatively similar “pedestrian walkways.”

I also reiterated a larger point made in a letter to Sound Transit during the scoping process a few years ago:

“An elevated alignment in the heart of the West Seattle Junction Urban Village and through a built-up neighborhood in the Youngstown area of ​​North Delridge would be unique to this line and unprecedented for light rail in Seattle.”

Here is a link to the 14 page EIS Summary Project that covers West Seattle.

Republicans: conservative or just as radical?