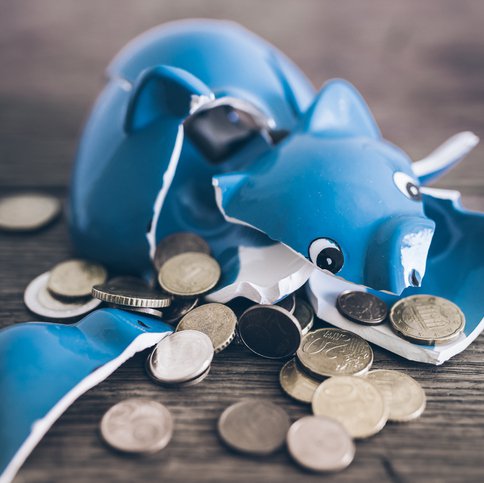 Bankruptcy is a last resort for consumers in financial distress, giving them a chance to liquidate their debts and have a fresh start. That opportunity comes at a cost, both in what consumers pay to file bankruptcy and in the damage it does to their credit score — and getting access to credit with a bad credit score can be difficult for many years. How many people file bankruptcy every year? Are some demographics more likely to file bankruptcy? And what’s the most common cause? Find out here and head over to bankruptcy hq.

If you think the answer to that last one is medical debt, you’ll soon learn that’s something many news articles have gotten wrong.

In this analysis, we’ll be exploring the most important personal bankruptcy statistics dating back to the 1980s. (We’ll also provide some links below for those interested in credit counseling.)

In the 25 years from 1980 to 2005, personal bankruptcy filings rose significantly. Bankruptcies went up fast, though there were periods where filings dropped for a few years. We can’t attribute this to population growth, either. In 2004, the bankruptcy filing rate was 5.3 for every 1,000 people, over four times as high as it was in 1980.

What stands out most is that filings reached a record high of 2,039,214 in 2005, and then dropped to just 597,965 in 2006, the lowest rate since 1988. That’s because of the Bankruptcy Abuse Prevention and Consumer Protection Act (BAPCPA), which added new provisions to the bankruptcy process. Most of these provisions took effect on Oct. 17, 2005.

Before the BAPCPA, consumers could file for Chapter 7 bankruptcy and liquidate all their debts regardless of their income. The BAPCPA stipulates that consumers can only file Chapter 7 bankruptcy if they make less than the median income in their state or they pass a means test demonstrating they wouldn’t be able to afford a payment plan for their debts. If neither of those is true, the consumer must file Chapter 13 bankruptcy, which involves a three- to five-year payment plan.

A massive number of consumers filed Chapter 7 bankruptcy in 2005 to get it done while the laws were more lenient. Since so many people filed in 2005, it led to a natural drop-off the following year.

Beyond that big drop, there’s good recent news regarding personal bankruptcies. The number of filings has gone down every year since the start of the decade, and there were less than half as many filings in 2018 as there were in 2010.

There are several types of bankruptcies, and they’re referred to by the chapter of the U.S. bankruptcy code that they follow. Before we look at yearly bankruptcy filings by chapter, here’s a summary of how each chapter works:

Chapter 7 bankruptcy filings are the most common in every year in this range. That makes sense, considering the debtor can complete the entire process in a matter of months instead of years.

There was, predictably, a large drop in Chapter 7 filings from 2005 to 2006, in part because the Chapter 7 laws became stricter and most debtors who wanted to file this type of bankruptcy did so in 2005.

The percentage of Chapter 7 filings went back up over the next four years. One possible reason is that, during the financial crisis, people needed to file bankruptcy because of losses or reductions in income, meaning they could qualify for Chapter 7.

A less common type of bankruptcy is Chapter 12, which is available only to farmers and fishermen. Like Chapter 13, it involves a payment plan, but it has much higher debt limits.

Chapter 12 filings are the least common of the personal bankruptcy options, but numbers were higher than normal in 2010 and 2011. Here are the yearly numbers going back to 2006:

The most common causes of bankruptcy

The data above comes from a survey of consumers who filed bankruptcy between 2013 and 2016. Debtors were able to choose multiple factors that contributed to their bankruptcy.

By far the most common cause of bankruptcy was a loss of income, with over three-quarters of filers stating it was a contributing factor. Unfortunately, most simply aren’t prepared for this situation.

The usual recommendation on how much to save in an emergency fund is three to six months of living expenses. In our survey on Americans’ financial habits, we found that only 15% felt confident they could go without six paychecks or more before missing financial obligations.

Medical debt is often called the most common cause of bankruptcy, but that’s not quite the case. Medical expenses rank second, as they’re a factor in bankruptcy filings for 58.5% of consumers.

It should be noted that medical issues aren’t just a problem because they’re expensive. They can also result in a loss of income and even a job loss. That’s why having a plan for managing finances during a medical emergency is important, too.

Considering how much their populations vary, it doesn’t make sense to evaluate states by their number of bankruptcy filings.

In the table below, states are ranked by their number of bankruptcy filings per 1,000 residents to provide a more accurate picture of where debtors file bankruptcy the most. It also includes the numbers for Washington, D.C., and the United States as a whole.

Bankruptcy is a much bigger problem in the South — the four states with the highest bankruptcy rates are all Southern states. This could be in part because these states often have more seasonal work and fluctuating wages. Median incomes in several of these states are below the national average, too.

In several Southern states, bankruptcy attorneys don’t charge anything upfront for Chapter 13 cases. Instead, they let debtors pay through their bankruptcy payment plan. With Chapter 7 cases, attorney fees (which can be $1,000 or more) are usually due immediately or shortly. This leads lower-income debtors in these states to predominantly choose Chapter 13 bankruptcy, even if they’d be better off filing through Chapter 7.

Unfortunately, this affects African Americans more than any other group, something we’ll explore further in a section below.

Alaska does the best in terms of personal bankruptcies, having both the lowest number overall and when adjusted for population. That’s somewhat surprising, considering that the state has the highest average credit card debt. However, it also ranks in the top 10 for median income.

Bankruptcy filing rates are the highest in middle age, with over 50% of debtors being between 35 and 54 for each year in this study.

This trend isn’t limited to one study or time period, either. The authors of “Graying of U.S. Bankruptcy: Fallout from Life in a Risk Society” found that older age groups had been making up a larger percentage of the bankrupt population from 1991 to 2016. And from 2007 to 2016, the mean age for bankruptcy filers jumped from 44.4 to 48.5.

Debt can be a problem at any age, but it’s more difficult for older consumers because they’re typically retired or near the end of their working years. Money can be tight, especially for those with insufficient retirement savings.

Even after adjusting for population sizes, women filed bankruptcy more often than men in the most recent available data. This is likely in large part because of that gender pay gap.

There are two groups with higher bankruptcy rates than their population percentage: the married and the divorced.

Married debtors accounted for the majority of bankruptcy filings in each year studied. Married couples tend to have more expenses and more debt than those who are single, two factors that can make bankruptcy more likely.

Divorced debtors are also more susceptible to filing bankruptcy. With the cost of divorce attorneys and settlements, and possibly the challenge of going from two incomes to one, it makes sense that those who have gotten divorced have a higher bankruptcy risk.

The biggest takeaway here is that, besides improving your earning potential, a college education also puts you at a lower risk of bankruptcy. Those with graduate or bachelor’s degrees declared bankruptcy at below-average rates. Associate’s degrees didn’t help nearly as much.

Those who completed some college without getting a degree had the highest bankruptcy rates compared to their population size. This group incurs at least a portion of the typical college costs — but without a degree, they don’t increase their earning potential.

From 2006 to 2010, bankruptcy rates rose among those with a college degree and fell for those with a high school or some college education.

If you guessed that bankruptcy would be more common in lower income brackets, you’d be right. In each year of this study, over half of all bankruptcy filings were made by people earning $30,000 or less per year.

Bankruptcy rates went up from 2006 to 2010 among Americans making over $60,000 per year, and there’s no clear cause. One possibility is that the financial crisis drove more high earners to bankruptcy than other demographics.

As of 2010, bankruptcy rates for each ethnicity are similar to their population percentages. There were, however, some significant changes from 2006 to 2010.

The bankruptcy rate for African Americans decreased substantially during that period. On the other hand, filings among people of Latino/Hispanic and Asian descent increased, with the filing rate for the latter group more than doubling.

But these bankruptcy filing rates don’t tell the whole story, particularly for African Americans. The American Bankruptcy Institute’s (ABI) Final Report and Recommendations from 2017 to 2019 shows that over half of African Americans who file bankruptcy choose Chapter 13 bankruptcy. That’s a disproportionately higher rate than that of any other race.

The ABI also found that African Americans had disproportionately lower rates of successfully discharging debt through bankruptcy. This is in part because of their high Chapter 13 filing rate. Since that type of bankruptcy requires the completion of a payment plan, discharge rates are much lower than they are with Chapter 7 bankruptcy.

Personal bankruptcy statistics are a mixed bag. We can see some positive signs as well as plenty of problematic information.

The number of bankruptcies has been falling since 2010, and fewer consumers filing bankruptcy is a good sign. But bankruptcy rates are much higher than the national average in several parts of the South, and several demographics are especially vulnerable, including older Americans and debtors in lower income brackets.

Work also needs to be done so that debtors of all races have equal access to Chapter 7 bankruptcy, no matter where they live. Chapter 13 bankruptcy is supposed to be for debtors who can pay back at least some of what they owe. Unfortunately, African American and Southern debtors file Chapter 13 bankruptcy at much higher rates because it’s cheaper upfront, even when they’d be better served by Chapter 7.

If you’re considering filing for bankruptcy, consider speaking with a credit counselor first. Credit counseling can help you figure out the best way forward, even if your debt feels completely overwhelming. The National Foundation for Credit Counseling (NFCC) is a great place to learn about the process and find a credit counseling agency near you.