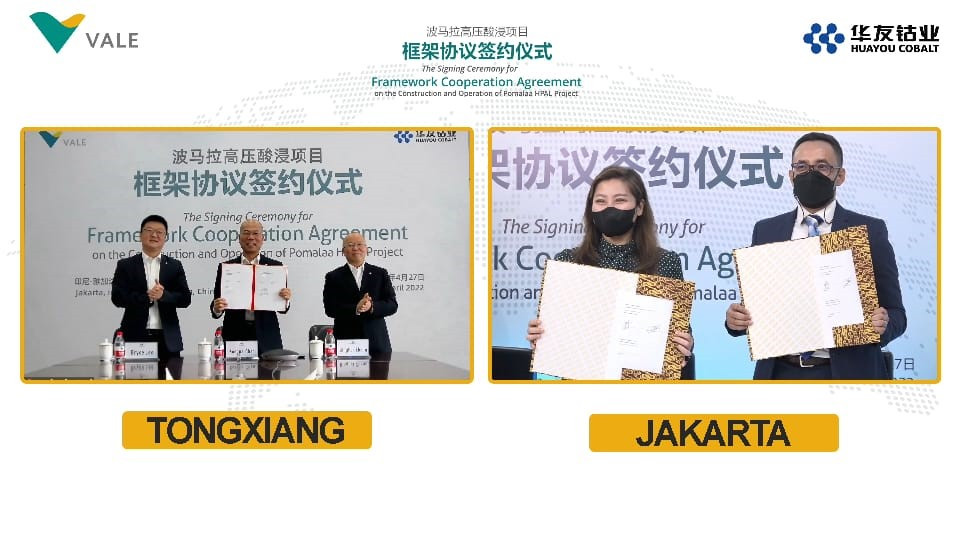 “Vale has finalized the FCA signing with Huayou to build the Pomalaa Block HPAL project. This is very positive not only for INCO, but also for the Pomalaa community, the regional administration and the nation,” said Febriany Eddy, CEO from Vale Indonesia. -signing event, held on April 28 at Bottega Ristorante in Sudirman Central Business District (SCBD), Jakarta.

This is one of two upcoming Sulawesi smelter projects for Vale Indonesia, with the second smelter project being located in Central Sulawesi. Vale Indonesia currently operates an integrated nickel mine and refinery in Sorowako, South Sulawesi. The nickel refinery has been in operation for 53 years and produces the lowest carbon emissions per ton of nickel in the country.

The company has pledged to avoid using coal to power its new smelters, with plans to replace high-emission fossil fuels with hydropower at Sorowako and liquefied natural gas (LNG) in the Bahodopi block.

Although Vale Indonesia has not revealed the source of energy it will use to power the new smelter in the Pomalaa block, it has a maximum grace period of 6 months to make a decision. Construction of the foundry has already begun and is expected to be completed within three years.

Additionally, Vale Indonesia is confident that Huayou’s experience in more efficient mining technologies will help accelerate the completion of mechanical components in a year or less.

“We appreciate that our partner is in line with our low carbon program, not to use a coal-fired power plant. This FCA is proof of the alignment of our sustainability commitments, which is extremely important to PT Vale,” Febriany said at the April 27 signing ceremony.

“Huayou has a proven track record in HPAL construction and operations in Indonesia. We are convinced that both sides can complement each other. »

The two parties have agreed that Huayou will build and develop the Pomalaa Block HPAL project, while Vale Indonesia has the right to acquire up to 30% stake in the project.

The smelter will be installed with the Huayou HPAL processor, the proven technology and system for processing low-grade limonite and saprolite ores from Vale Indonesia’s Pomalaa Block mine to produce mixed hydroxide precipitate (MHP). The smelter’s minimum installed capacity is estimated at 120,000 metric tons of nickel per year, with the MHP expected to contribute to Indonesia’s electric vehicle (EV) industry, which is expected to grow 23% this year.

“This is an important milestone that reflects our long-standing commitment to developing Indonesia’s world-class nickel resources,” said Vale Indonesia Chairman and Commissioner Deshnee Naidoo, who attended the FCA signing via video link.

Huayou has been involved in the development of several nickel and cobalt smelters in Indonesia, especially as investment in the country’s electric vehicle industry has increased significantly in recent times. Speaking to Reuters, the company is targeting annual production of 120,000 tonnes of nickel and 15,000 tonnes of cobalt.

Additionally, Brazilian miner Vale’s Canadian operation recently signed a long-term contract with Tesla, Inc. to supply Class 1 nickel to the United States. The agreement is in line with Vale’s strategy to become a market leader as the largest producer of finished nickel in North America.

Also speaking at the post-signing event, Febriany said the smelter projects will benefit local communities in terms of job creation, mineral conservation for the environment and local economies.

“There have been some questions about Vale’s commitment […] Monday, Tuesday and Wednesday. In fact, the consequences would be very heavy if we don’t fulfill our commitment, if we don’t deliver Pomalaa Block,” CFO Anto said, joking that the thought kept him awake at night.

“We don’t want our time [on the Board of Directors] like when PT Vale has to give up the Pomalaa block,” Anto continued, speaking directly to Febriany and Adriansyah. “We have a personal commitment [in this]. There is no such thing as not being, it must be. This partnership model we are doing is a new model, it has never existed in Indonesia [before].”

Anto also pointed out that the new cooperation will not only benefit Vale Indonesia, but also people living near the Pomalaa Block by helping to accelerate local growth and development. He added that although the partnership model was different, Vale Indonesia’s core values ​​remained the same and the company continued to work towards the same goals using its environmental, social and governance (ESG) values.

Febriany added that the company also continues to uphold its “3P” values ​​of people, planet and profit.

The project is also supported by state-owned mining holding company MIND ID, which has been a long-time partner of PT Vale Indonesia and acquired 20% of Vale Indonesia’s shares in 2020. The disposal of company shares is a requirement of the company. 2014 amendment to its contract of employment (CoW) with the Indonesian government, which appointed MIND ID as its representative for the specific arrangement.