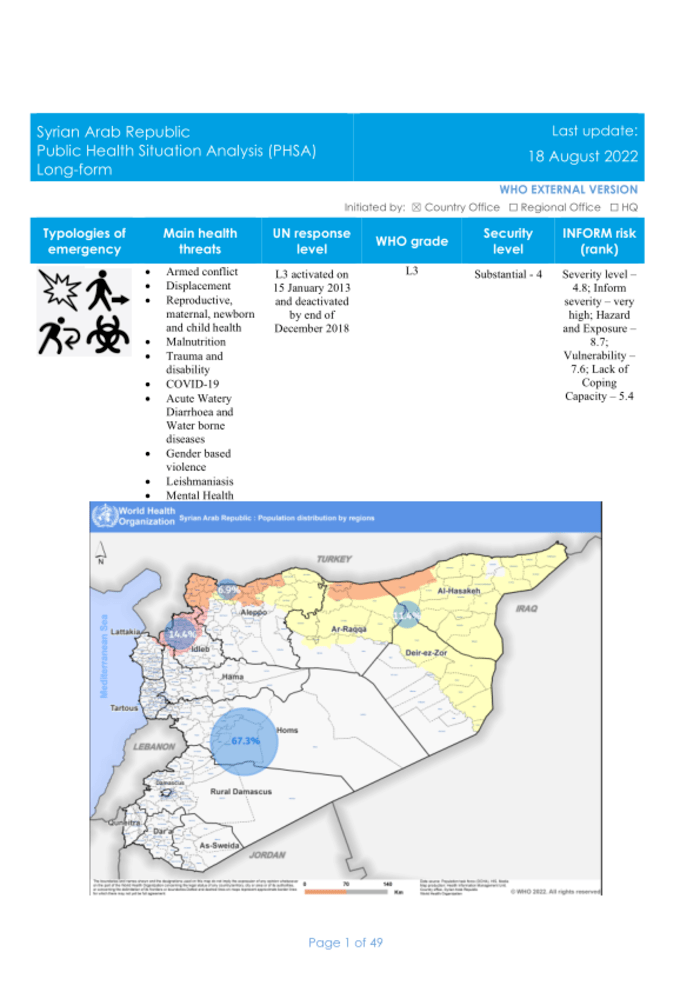 Syria is experiencing a protracted political and socio-economic crisis which has led to a serious deterioration in living conditions. The already fragile health system is overloaded with additional pressure due to the COVID 19 pandemic. 6.9 million people have been displaced since the start of the crisis; 5.6 million people have fled the country as refugees, the vast majority to neighboring countries. It is estimated that up to 90% of the population lives below the poverty line, largely due to the recent severe economic decline. This is a 10% increase over previous years. Displacement continues to be heavily concentrated in urban centers – where more than 87% of IDPs now reside, compounding pressure on resources, infrastructure and overstretched services.

At least 12.2 million people need health assistance. The infrastructure of essential health services, such as hospitals and health centers, is in poor condition and requires significant maintenance and rehabilitation to provide a minimum level of service delivery.

Half a million children suffer from chronic malnutrition and another 137,000 children under the age of five suffer from acute malnutrition, increasing their exposure to preventable morbidity and mortality.

Non-communicable diseases – cardiovascular diseases, injuries, cancer and diabetes, among others – and epidemic-prone diseases are the most common causes of morbidity in Syria. An estimated 45% of all deaths in Syria are related to non-communicable diseases (NCDs), a 40% increase from 2011 rates. This increase in morbidity rates can be linked to cumulative damage to health infrastructure and WASH in some parts of the country, the lack of trained personnel and restrictions on the importation of essential supplies and equipment, which combined have reduced the availability and accessibility of health services. Displaced people need continuity of care for the prevention and treatment of cardiovascular and kidney disease, diabetes, cancer, psychosocial and mental health, as well as maternal and child health services.

Surveillance data available for epidemic-prone diseases other than COVID indicate that influenza-like illnesses, acute diarrhea, leishmaniasis and suspected hepatitis are the leading causes of morbidity in all age groups. This is particularly the case for IDP camps and sites where indicators related to access to drinking water, sanitation and hygiene services are systematically worse than in resident and host communities. Displaced people are at increased risk of infectious diseases due to limited access to clean water and sanitation, overcrowding and other risk factors.

On September 10, 2022, the Syrian Ministry of Health announced an outbreak of cholera in Aleppo with 15 laboratory-confirmed cases reported. As of September 13, 2022, a total of 1,475 cases of severe acute watery diarrhea have been reported in Syria. Tuberculosis and meningitis outbreaks are reported and treated. Persons with disabilities (27% of all types) require rehabilitation and assistance services.

Vaccination against COVID-19 remained at substandard levels with 9.5% of the population only vaccinated. Due to the protracted crisis, the health system in the Syrian Arab Republic has become weaker and even more fragile.

Worrying is the situation of operations in the northeast (including the camps) and northwest of Syria with uncertainty about the evolution of the situation there in 2022.

Federal prisons ‘riddled with mismanagement’ probed by US Senate panel