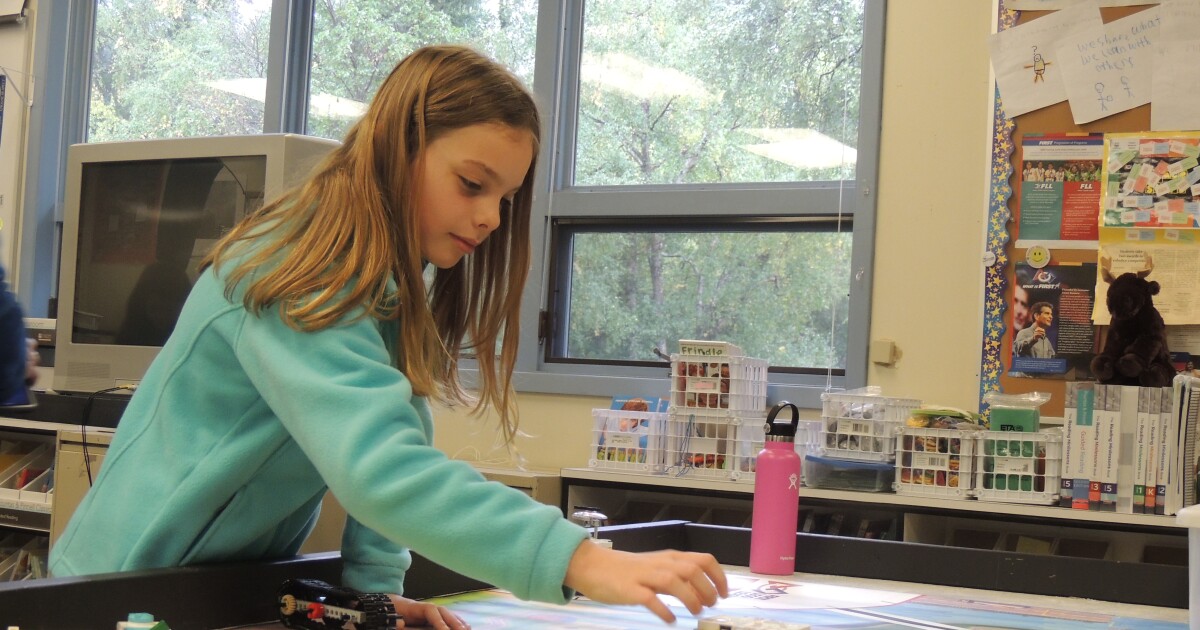 The Moosebots are gearing up for another year of robotics

The 19 students and one teacher from Moose Pass School, one of the smallest on the Kenai Peninsula, aren’t the only ones roaming the school’s three classrooms. ‘

There are also robots.

Nine-year-old Maddy Aigeldinger holds a small Lego robot no more than three inches tall atop a pair of small blue wheels. She said each of their names: there’s Ottie, the favorite, then L5 and Bob the Destroyer, their test robots.

Aigeldinger is one of the Moosebots – Moose Pass School’s Lego robotics team. The Moosebots design and build robots that they put to the test in annual competitions against schools across Alaska.

Although the Moose Pass school is small, its team still brings home trophies year after year. In 2021, Aigeldinger and his fellow Moosebots won the coveted Robot Design Challenge at the state level competition. In the past, they participated in the FIRST Lego League Challenge, a global robotics and design competition for elementary and middle school students.

On the first Robotics Day this year, students buzzed with excitement to get back to work on their robots.

Bryden had no experience in robotics then.

“I knew Legos, but I didn’t know much about programming. I’m a mom, I’m not an engineer,” she said.

But Bryden learned with the kids. Today, she organizes Lego robotics competitions for the entire state of Alaska. And although her sons have since graduated, she still works with Moose Pass students each week to design robots and build the Lego bridges and obstacles they interact with.

For last year’s national contest, held remotely due to the pandemic, the Moosebots designed a device to prevent boxes from being damaged at the post office by dividing them by size. They even presented the device to the local postmaster.

The theme of this year’s national competition is energy. Students work on the design of a waterwheel, inspired by a historic Moose Pass landmark. Bryden said they were also thinking about the Grant Lake Hydroelectric Project as they work with the theme.

She said local impact is one of the core values ​​that the FIRST Lego League emphasizes in its mission. It is a set of values ​​that students know well.

Sandra Barron, the Moose Pass teacher, said an important part of life at Moose Pass is that every student is involved in everything.

She said that when there was a play at school, everyone participated in it. And when there is a robotics competition, everyone is involved. Boyle said it was a key part of their success.

“It’s really important, because you have to work together to do things,” she said.

With fewer than 20 students in kindergarten through eighth grade, Moose Pass School has always been a place where students of all age groups work together on the same projects.

Bryden said grade level is not important to students, whom she sees as a very good role model for education. This was true during their robotics class, when she often has a group of older students mentoring the younger ones.

“I think that’s such an important part of this program, that the kids are teaching themselves what they know,” she said.

Bryden also hopes the program will help students improve their problem-solving skills — and perhaps even rekindle lifelong passions for engineering.

She said that was the case for her sons.

“I think part of that definitely inspired my two kids to think like engineers and potentially want to pursue that career,” Bryden said.

This is also true for some current Moosebots, but not all. While Ruby Boyle said engineering could be in her future, Maddy Aigeldinger said she remains committed to her lifelong dream of owning a donut shop.

The Moosebots will compete in the annual statewide FIRST Lego League competition this winter.